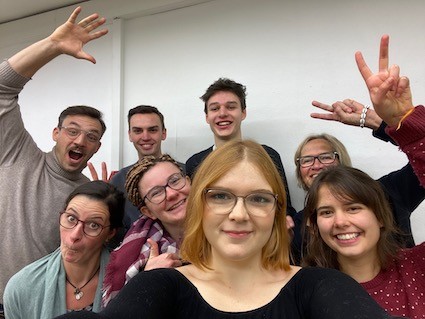 On the sixteenth of November we met us for the second time. At this day we had a seminar about movies and what we have to look for if we create our documentary film. Johannes Müllerleile led the course, he is a referee at the DHBW in Ravensburg. We began with a small round of introductions. All of us had to choose a selfie and with this picture we were able to present us.
After that Johannes started a presentation, which communicated important informations about filmmaking. He began with the history of movies and how the first steps looked like. It was very interesting to see the development from a still photograph to a film.
The second point was the composition of pictures, it isn’t equal where a person is standing in a picture. For example: If a person or an object is standing in the middle of a picture, the picture will look boring. But if you respect the „Rule of thirds“, the picture will be more exciting. By this rule you must cut the picture into nine parts theoretically. Now you see two horizontal lines and two vertical lines. At the points of intersection you should place persons or objects.
Another point what is important for a film are the aspect ratios and the picture details. The symbolism of colours and the position of the cameras are also very essential points, which we must consider.
Johannes told interesting facts about the content of movies, too. Many films even have the same archetypes. Examples are the heroes and the evildoers. Heroes like Harry Potter, Batman, Iron Man or Thor. And evildoers like Lord Voldemort, the Joker or Thanos. Another common ground of movies are their storylines, which often have the same structure.
After a small break, we began to make video to present us. First of all it is for the group in Uganda.